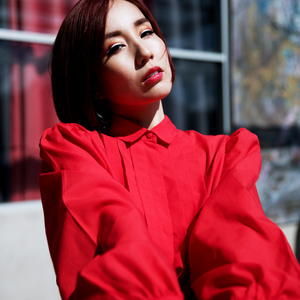 Since the Japan-wide release of her 1st album “The Light” in 2013, Nao Yoshioka’s music has garnered critical acclaim, especially for her exceptional voice.

Despite the successful expansion of her horizons through the release of her 2nd album “Rising”, a major debut, her collaboration with Grammy-winning producers on her ...

3rd album “The Truth”, and the constant touring the US and Europe, a growing predicament vexes her: the dichotomy of what she wants to be and what she is expected to be, and the thought of only having stable but slow growth in the Japanese music scene.

Determined to end this struggle, she decided to move her base to the US in 2018, successfully attaining the hard-earned artist visa, to restart her career in this new environment. Envisioning her voice resonating with audiences around the world, it is her natural ambition to be nominated for a Grammy.

Her first step, re-releasing and promoting “The Truth” in the homeland of soul music, gained her auspicious achievements; #32 on the Billboard Urban Adult Contemporary chart which is remarkable for a Japanese artist, a review of her single by the prestigious Rolling Stone magazine, a live performance on SiriusXM, and the Best International Artist award from the UK’s BRIGHT STAR AWARDS.

Her dream of gaining recognition around the world is slowly beginning to be unveiled... how this visionary’s newest album is received is in the hands (and ears) of a worldwide audience.

Last year, Japanese soul and R&B phenomenon Nao Yoshioka broke several industry molds when the U.S. re-release of her 2016 album The Truth (her third record in three prolific years) received overwhelmingly positive reviews across the board, making her the first Japanese soul singer to cause major waves in the birthplace of the genre. Rolling Stone had called the album “impeccable neo-soul” and the lead single “I Love When” had jumped to #32 on the Urban Adult Contemporary Billboard chart, signaling that American audiences were eager for the earnest, soulful style she was bringing.

But the fact that Nao had not produced a new album in two years at the time betrayed an underlying creative discontent with the already substantial success she’d achieved up to that point, both in Japan and on the international festival circuit. “All these amazing things had happened with my music career in Japan” she reflects, “But between who I am and who I’m expected to be, I had completely lost my way.”

That restless yearning for personal authenticity would serve as the catalyst for Nao to take bold action and relocate herself to the U.S. in 2018 to make her name in the place where the soul and R&B that she’d been singing her entire career had originated. The result is her much-anticipated fourth album Undeniable (out 08/16/19 on SWEET SOUL RECORDS), a record that celebrates that universal existential moment of coming back home to the core of oneself, rediscovering one’s own intrinsic and undeniable true nature after losing it somewhere along the way.

“The journey from my last album to here, it's like I was kind of reborn in a sense, I needed to throw away everything that I had become at that moment. I had to face myself, talk to my heart and ask myself who I really am and what I really want. So that's why my new album is about those undeniable feelings. Because I needed to know what I most desire, and what my desire wants me to do.”

With this universally relatable concept of undeniable as the starting point, Nao worked side-by-side with her long-time producer/manager and SWEET SOUL RECORDS CEO, Naoki Yamanouchi, to break the larger message into smaller constitutive themes around which the individual songs would be composed. Each appropriately titled track represents a distinctive component of that undeniable true self that Nao could no longer deny. For example, “Boundaries” is an upbeat track encouraging us to transcend the social divides that confine us and to surpass our own self-imposed limitations that keep us from becoming who we want to be; “Liberation” a song about how fear compels us to make mistakes in life, with a powerful message that we should not live fearing our future, but rather, live like we have already achieved it in order to liberate ourselves from fear; “Celebrate” a song about celebrating diversity of love, and accepting one’s differences as strengths: and “Up and Away” an empowering track about starting over fresh in a new place. Fourteen tracks, each celebrating a unique avenue of self-rediscovery.

A dream-list of producers and musicians was curated to align the perfect musical collaboration for each theme, paring Nao with producers and musicians who resonated with the message behind each song. In addition to bringing on key collaborators from her last album like Musicman Ty, producer of “I Love When” and Khari Mateen (Jill Scott, The Roots) back at the engineering helm, Undeniable adds King of Indie Soul, Eric Roberson, Lorenzo Johnson (Ledisi, Maysa), Chris Dave and The Drumhedz keyboardist Daniel Crawford, and A Touch of Jazz production team alumni and Grammy-winning producer Vidal Davis (Ne-yo, Usher) to the lineup. The album also features young and upcoming producers/artists like Devin Morrison and Kiah Victoria.

“I would always write down the concept first and break down all the messages,” says Nao. “I’d come with some lyrics or some ideas and we would listen to the demo tracks, then construct the melody and the lyrics around that. That’s how “Invest in Me” and “Liberation” were done in collaboration with Eric Roberson. Other times, like when working with Musicman Ty, we’d just write it all from scratch. The workflow for each track was entirely different depending on the artists or producers that I was working with for that particular piece.”

The album’s lead single, “Got Me”, produced by Musicman Ty, is what Nao refers to as a “grey-area love song of mixed feelings” that is a departure from her typically positive outlook on love. The song describes a doomed relationship plagued by codependence and the inability to leave someone, even when deeply hurt, because one can’t find the courage to be alone.

“When I write love songs, I typically always talk about the positive side, but I wanted to dig into my painful past because of the concept that I have undeniable feelings. And it’s a reminder that undeniable feelings are not only on the positive side. I think, when we struggle, we don't struggle with a black and white, we always struggle with the in-between. And we often cannot decide which feeling to go with."

Nao’s commitment to the philosophy of making this album truer to that grey zone of organic human experience also translates to the production element of Undeniable. While the previous album only used track sound, this one needed to be a combination of live instrumentation and gritty, cutting-edge digital beats. Nao felt the need for a live musical element for its ability to “come straight to my heart and make me feel something when I listened to it, but at the same time, I needed to have a strong, driving beat.”

As such, tracks were programmed by the talented pool of producers, then vocal and instrumental elements were recorded live at the legendary Philadelphia studio, MilkBoy the Studio, a site that is  historically relevant as the epicenter of the Neo-Soul movement of the early 2000’s, and was originally opened by SalSoul cellist and Philly Soul legend Larry Gold. Several tracks were reconstructed live in The Studio with members of Philly favorite duo Killiam Shakespeare and some string arrangements composed by Larry Gold himself.

“Philadelphia is a very special place for me because it’s the first city that I performed in when I came to the United States as a professional artist. Since then, I always work with Philly musicians whenever I perform in the United States, so I feel there is a strong connection. In Philadelphia, I love the musicians. I love the sound.  And recording at The Studio is one of the things I've always wanted to do. And it's finally happened.”